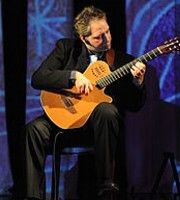 Francesco  Buzzurro  guitarist of the first order, a Sicilian, known in the world has produced his latest album 7th October 2014 "THE FIFTH ELEMENT".

Trained in Sicily, graduated from the Conservatory of Palermo, began playing at age six.
Party with a classical education, he soon introduced elements of folk and jazz.
The love of jazz led him to attain a degree in Jazz Music.

It 'a talent internationally, is a guitarist out of the box and has a peculiar technique of improvisation

on classical guitar, so every year the University of Southern California in Los Angeles called him as a lecturer in

seminars unified for the departments of classical and jazz guitar.
In 2013 he won the international exchange of culture of Freiburg as best guitarist European.

E 'degree in languages ​​and Literatures and travels to various countries of the world.